John Gundrum joined the agency in 1973 and the name was changed to the Gundrum Insurance Agency. After working 3+ years for a Big Eight CPA firm Larry followed into the business in 1978. In 1981 Jerry sold the business to his sons.

Jerry Gundrum grew up in Slinger and graduated from Slinger High School in 1939. After working at Gundrum’s Market he entered the Army during World War II. He attended infantry officer’s school and graduated as a second lieutenant in May 1943. He served in Africa and Italy with the 85th Infantry Division. While serving in Italy Jerry was awarded the Silver Star, Bronze Star, Purple Heart, and Combat Infantry Badge and received a battlefield promotion. After his discharge from the service Jerry was employed for 7 years as a bookkeeper at Zwald’s Mill in Slinger. 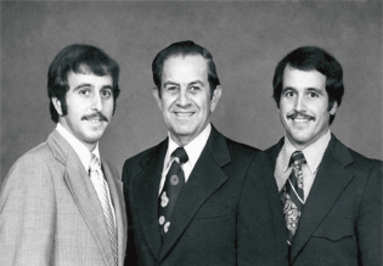